Print Page
Why Nike designed a sneaker that is made to be disassembled
Friday, May 27, 2022
by: Fashion United
Section: Industry News 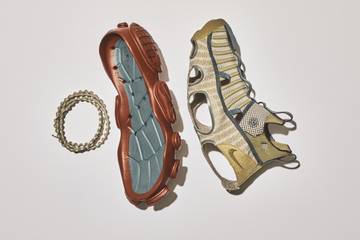 
On Saturday, the Brooklyn Half Marathon was held in New York for the first time since the start of the pandemic. A young runner in his thirties collapsed after finishing the 13.1-mile race and was later pronounced dead from a suspected cardiac arrest. The man was one of sixteen people taken to the hospital that day, according to the FDNY, amid the unseasonably hot and humid weather.

A weekend of record high temperatures across the US and Western Europe has brought summer upon us a month early of its official start date. Reports released in January and April by the European Union-funded Copernicus Climate Change Service (C3S) point to the last seven years as being the hottest on record and that the number of summer days with high levels of heat stress is increasing. 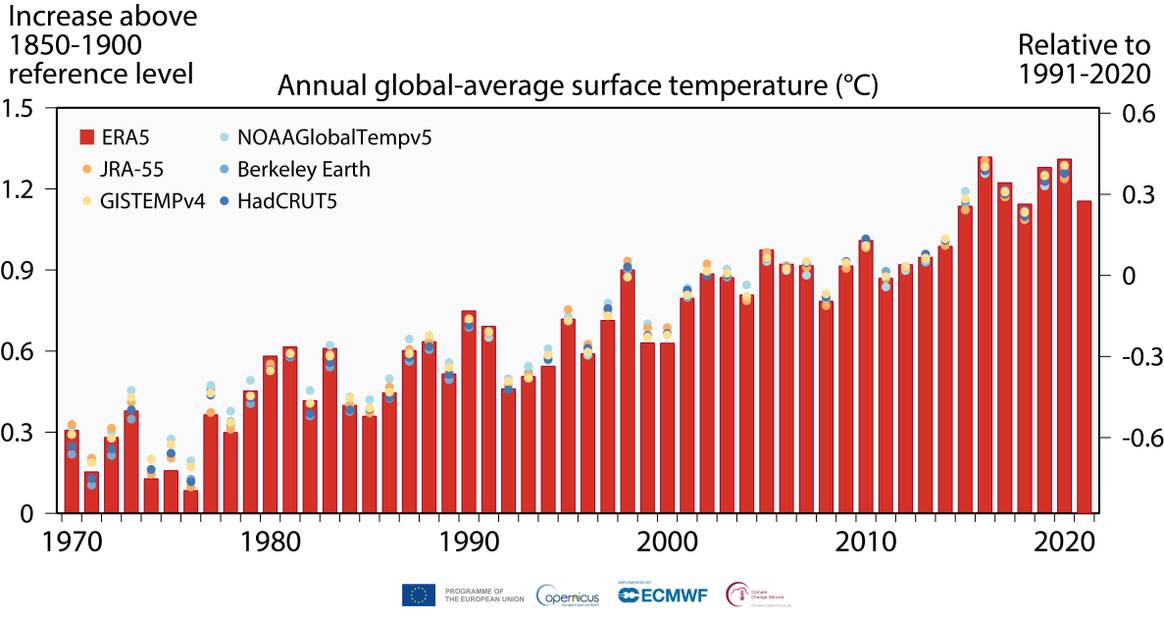 
The C3S European State of the Climate report notes that extreme surface air temperature affects everything from agriculture to energy demand and especially human health. Athletes of all disciplines will feel the impact of climate change caused by rising levels of greenhouse gasses that trap heat and warm the planet.

“Carbon dioxide and methane concentrations are continuing to increase year on year and without signs of slowing down,” Vincent-Henri Peuch, Director of the Copernicus Atmosphere Monitoring Service shared in a statement that accompanied the January findings. “2021 was yet another year of extreme temperatures with the hottest summer in Europe, heatwaves in the Mediterranean, not to mention the unprecedented high temperatures in North America,” Carlo Buontempo, the director of C3S, added. “These events are a stark reminder of the need to change our ways, take decisive and effective steps toward a sustainable society, and work towards reducing net carbon emissions.” 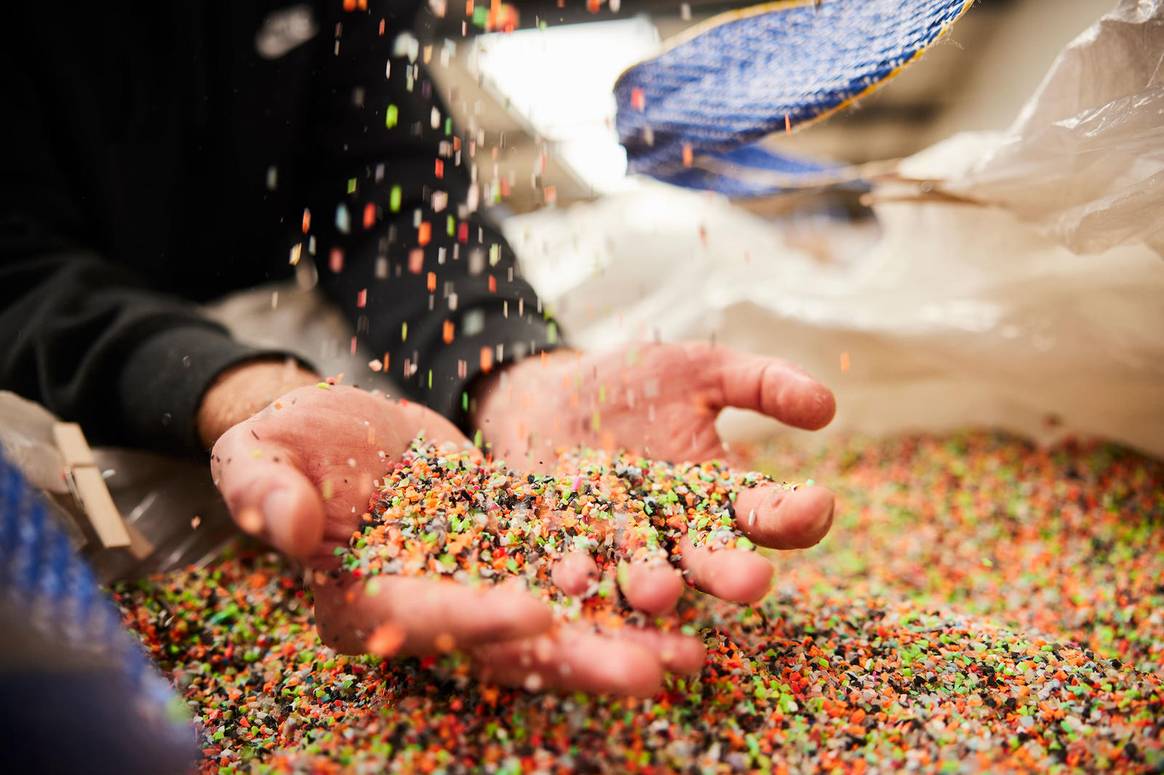 Nike accepts worn out sneakers of any brand and recycles them into Nike Grind material. Image courtesy of Nike.

In 2019, Nike partnered with the Climate Impact Lab, a coalition of more than 30 climate scientists, economists, analysts, and other experts from some of the US’s leading research institutions. The collaboration demonstrated how rising temperatures will and already are impacting the work of athletes: a continued increase in extreme heat could shave two months off the training calendar by 2050 for sports like American football and the number of quality practice days for snow sports could decrease by 11 to 22 percent in that same timeframe.

To highlight the connection between climate and sports and to put forth the company’s own plan towards zero carbon and zero waste production methods, Nike launched their “Move to Zero” campaign to coincide with the Climate Impact Lab collaboration. The plan includes multiple initiatives such as eliminating single-use plastics at all Nike campuses, powering distribution centers with renewable energy, (like their facility in Belgium), diverting used footwear and manufacturing waste from landfills and repurposing them into Nike Grind material that can be incorporated into running tracks, basketball courts, and gym tiles. Nike also refurbishes and resells gently worn shoes at a lower price.

The imperfect process of designing with the future in mind 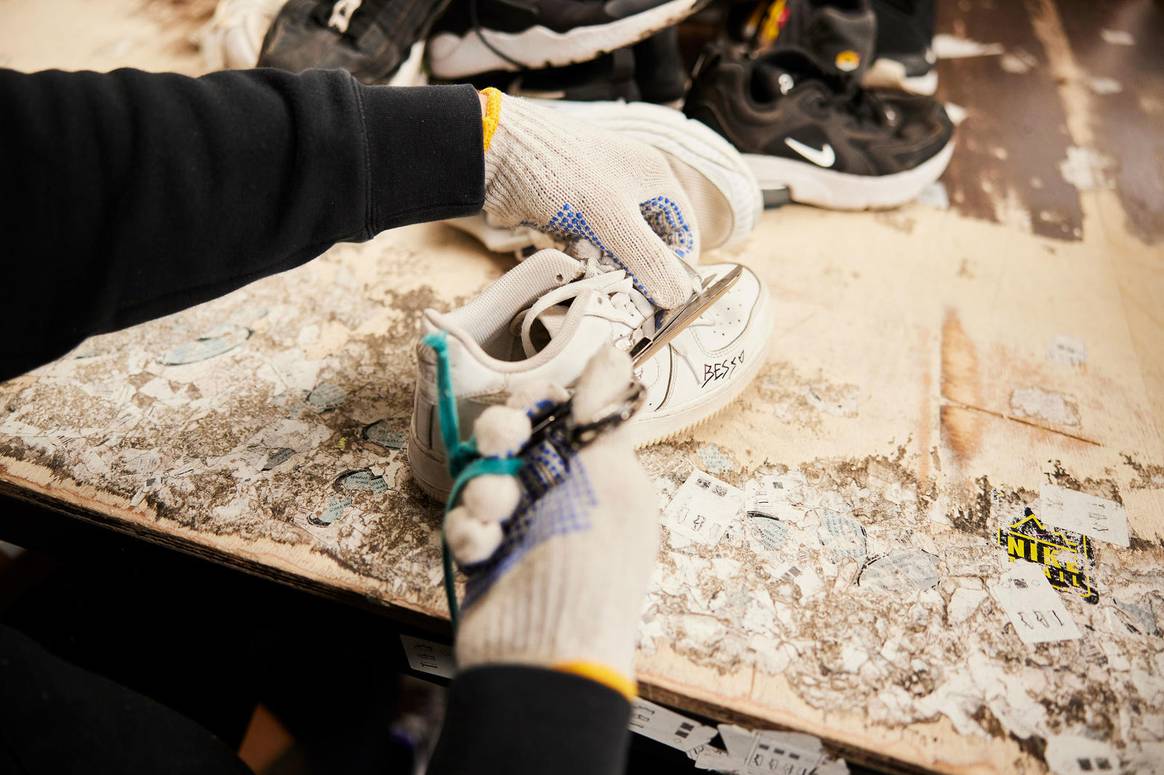 The manual work that goes into preparing a sneaker for recycling as not every component is recyclable. Image courtesy of Nike.

To minimize impact on the planet, the design process for a product has to include its end of life in mind. Current recycling systems around the world are not set up to accommodate clothing and shoes, which require manual sorting, separation by fiber, removal of unrecyclable trims, and other disassembly. Many items are also made of mixed materials or contain chemicals or plastics and there are not the technological or chemical solutions yet available to break them down.

According to the Environmental Protection Agency (EPA), only around 13 percent of clothing and shoes thrown away in the US end up being recycled and so companies should help develop recycling methods by incorporating them through a circular design process where waste can become a material resource. Currently, France is the only country that imposes a mandatory Extended Producer Responsibility (EPR) policy on companies producing new textiles and clothing in the French market, which requires them to assume responsibility for collecting and recycling their used products, and so the Oregon-based Nike has been initiating a circular design scheme on their own initiative. 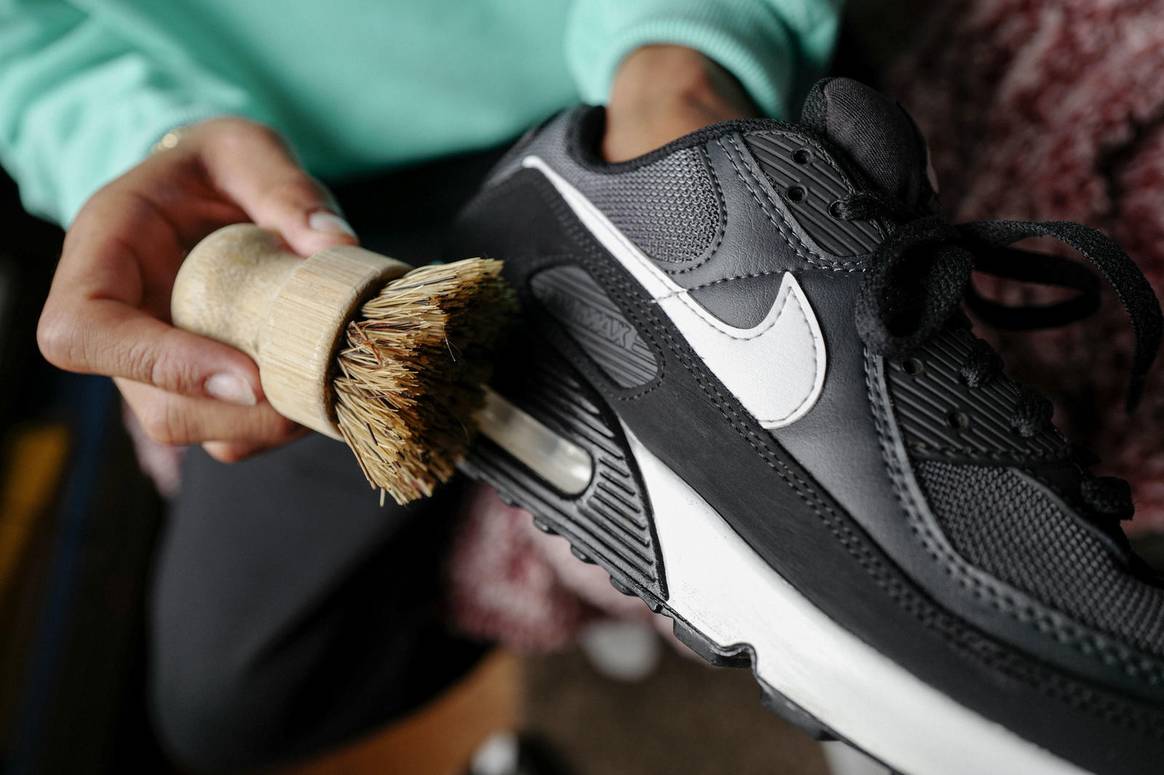 Through published statements on the challenge of developing a circular system, Nike acknowledges that their team does not yet have all the answers. But through the creation of an open-sourced workbook that features more questions than directives, the company has established 10 principles of circular design that their own designers are encouraged to consider when approaching new projects. The publicly available document titled “Circularity: Guiding the Future of Design,” poses design prompts like, “Can components safely decompose without additives or oxo-degradability? Does each component have value apart from the whole product? How could you build repair kits, including instructions, into the garment?”

“We are galvanizing and empowering everyone to make smarter changes, and we’re building diverse, inclusive teams to drive relentless innovation for athletes and the planet,” Noel Kinder, Nike Chief Sustainability Officer, stated.

The fourth principle of circular design for Nike is disassembly, in order to more easily facilitate a recycling process. “We’re used to the idea that a shoe is a shoe. But, it’s actually a treasure trove,” the document states. That’s where the company’s upcoming release comes into play. 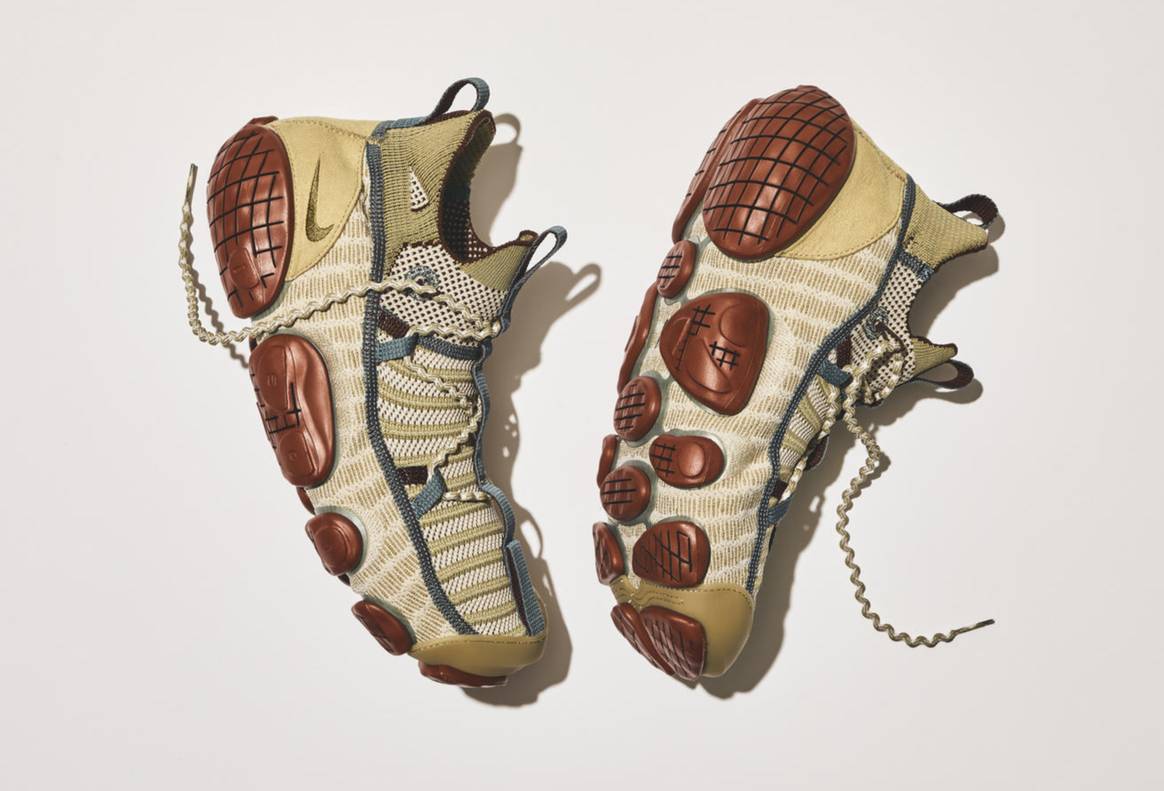 The Nike ISPA Link will be available in June. Image courtesy of Nike.

ISPA is an acronym that encapsulates the circular design philosophy: Improvise; Scavenge; Protect; Adapt. Without impeding functionality, the ISPA design team was able to sidestep the traditional bonding glue that makes disassembly, and therefore recycling, extremely challenging. Shoe recycling is usually accomplished through shredding—an energy-intensive process, Nike notes, that limits how the recycled materials can be used.

The ISPA Link design features three interlocking modules that are connected without glue and the midsole is made up of pegs that fit into openings engineered into the upper. Gluing is a time-intensive process and so by eliminating it, Nike clocked the assembly of a pair of Links at eight minutes. The style also does not require energy-intensive processes like cooling, heating, and conveyor belt systems and so it saves carbon emissions in both the manufacturing and recycling processes. By making the disassembly steps easy enough for customers to do on their own, shoes could potentially be taken apart before they reach Nike’s recycling & donation service—eliminating some of the additional hands the company would need as a part of the recycling process. 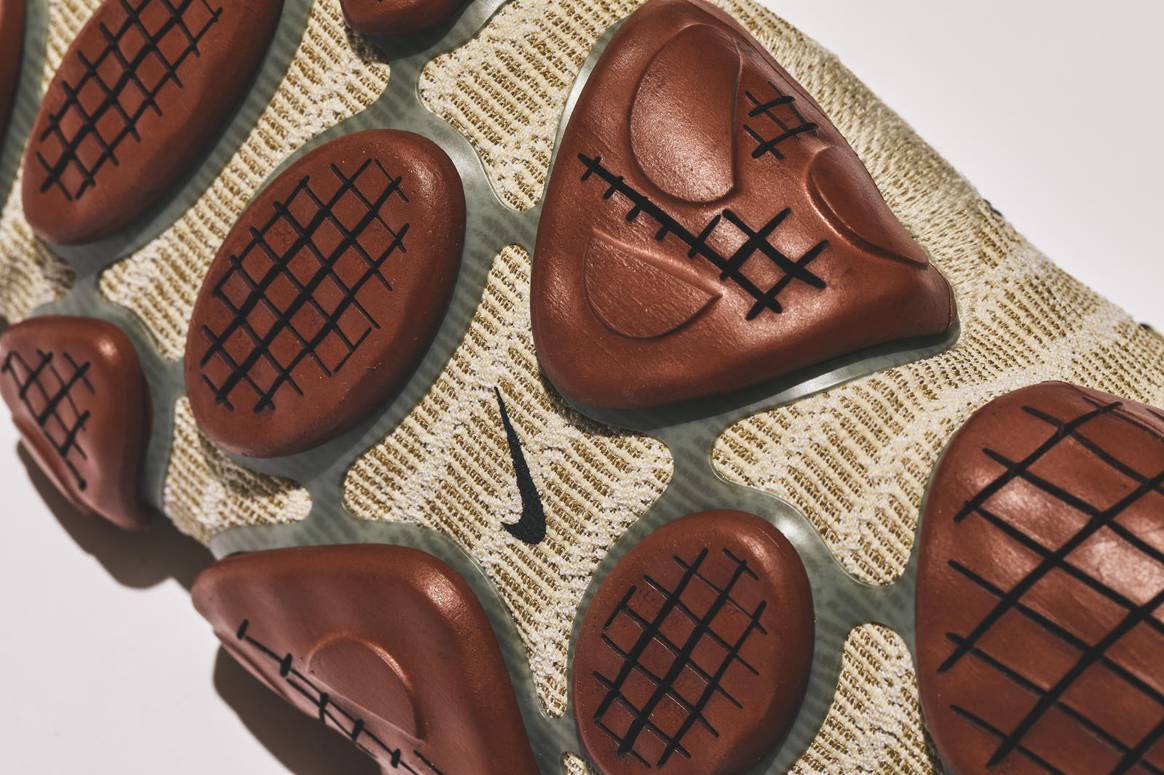 The comfort and stability of the ISPA Link was tested by 40 athletes who logged around 200 hours in the prototype, according to a statement by Nike. “Our hope is that these ideas and aesthetics become normalized, accelerating our ability to imagine how shoes will continue to evolve in the future,” said Darryl Matthews, VP of Catalyst Footwear Product Design.

The ISPA Link will be available in June at Nike stores and e-commerce platforms. While a price has yet to be announced, a 2020 ISPA Flow style retailed for 180 dollars. The ISPA Link Axis will follow in early 2023 and replace the traditional cut-and-sew method (used to make the Link) with a 100 percent recycled polyester Flyknit upper that is precisely engineered to fit over the outsole, eliminating seams as a next iteration of disassembly advancement.

Practicing the patience and persistence of an athlete and improving, little by little, is what will ultimately yield the next set of innovations in sustainability as Nike Chief Design Officer, John Hoke, notes: “By focusing on progress and not perfection and by making better choices, we embrace the chance to reconsider our craft in hope that it forms a groundswell of change.”