MONTRÉAL, April 22, 2022 /CNW/ - Scotiabank is bringing Girls HockeyFest to Quebec, elevating the game for 300 girls and women throughout the province. In partnership with the Montréal Canadiens, the free event aims to advance the game for girls province-wide with both on-ice and off-ice comprehensive training sessions. Girls HockeyFest is one element of Scotiabank's hockey for all commitment to make hockey more inclusive and accessible for all Canadians coast-to-coast. 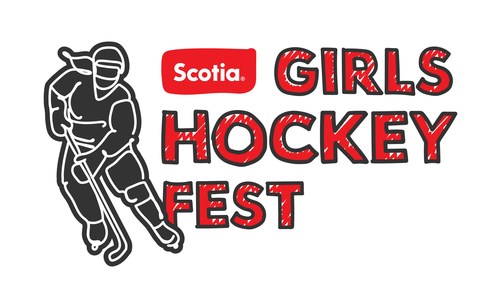 During Scotiabank Girls HockeyFest, participants aged 7-16 years will be joined by professional players from the PWHPA Secret® Dream Gap Tour for on-ice drills and off-ice training. The athletes will participate in an off-ice goal setting session led by Hockey Canada and parents will have the opportunity to participate in an inclusivity session presented by You Can Play. Lunch for all participants will be offered by IGA.  Montréal Canadiens alumni, Gaston Gingras and Éric Houde, will guide the on-ice sessions along with PWHPA players supporting both the on-ice and off-ice sessions. Scotiabank Teammate and Canadian hockey legend, Cassie Campbell-Pascall, will lead the event.


"I am so proud to be a part of Scotiabank Girls HockeyFest, which helps encourage young female athletes in communities across Canada to reach their full potential," says Cassie Campbell-Pascall.

"It's great to see Girls HockeyFest make its way to Quebec for the first time, the enthusiasm and passion for girl's hockey across the province is undeniable."

Since 2006, Scotiabank Girls HockeyFest has engaged more than 16,000 young female athletes across Canada. Girls HockeyFest is one program among many in Scotiabank's hockey for all initiative. Scotiabank's hockey for all is focused on promoting diversity and inclusion throughout the game of hockey. The platform is contributing $2 million over the course of 2021-22 hockey season to programs that focus on increasing diversity among community and grassroots hockey organizations across Canada.

"There is a place for all Canadians in hockey, and we are thrilled to be hosting Scotiabank Girls HockeyFest in Montréal to connect local young athletes with the sport's top professional talent," says Genevieve Brouillard, Regional Senior Vice President, Quebec at Scotiabank. "Montréal has a rich hockey culture, and I am proud to see that Scotiabank is supporting so many young female athletes by providing them an incredible opportunity to participate in such unique programming at the Bell Centre, the home of the Montréal Canadiens, an experience I am sure they will never forget."

Girls HockeyFest will take place on Saturday, April 23rd at the Bell Centre in Montreal, Quebec.

Scotiabank is the Official Bank of the PWHPA and supports their goal of showcasing the most talented women hockey players in the world. The PWHPA Secret® Dream Gap Tour concluded in Montréal on April 3rd with Team Scotiabank of the Calgary Region as the Secret® Cup Champions.

About Scotiabank
Scotiabank is a leading bank in the Americas. Guided by our purpose: "for every future", we help our customers, their families and their communities achieve success through a broad range of advice, products and services, including personal and commercial banking, wealth management and private banking, corporate and investment banking, and capital markets. With a team of approximately 90,000 employees and assets of approximately $1.2 trillion (as at January 31, 2022), Scotiabank trades on the Toronto Stock Exchange (TSX: BNS) and New York Stock Exchange (NYSE: BNS). For more information, please visit http://www.scotiabank.com and follow us on Twitter @ScotiabankViews.
About Scotiabank Hockey
Scotiabank is the Official Bank of the NHL®, Toronto Maple Leafs (who play at Scotiabank Arena), Winnipeg Jets, Calgary Flames (who play at Scotiabank Saddledome), and Edmonton Oilers. The Bank also supports the Montreal Canadiens and is a sponsor of Hockey Canada, the PWHPA and the Hockey Diversity Alliance. Since 2008, Scotiabank's Community Hockey Sponsorship Program has supported over one million kids and counting through its involvement with minor hockey teams in communities across Canada. To find out more about Scotiabank's hockey programs, please visit www.scotiabankhockeyclub.com.

About Professional Women's Hockey Players Association (PWHPA)
Professional Women's Hockey Players Association's (PWHPA) mission is to promote, advance and support a single, viable professional women's ice hockey league in North America that showcases the greatest product of women's professional ice hockey in the world. The organization aims to prove a united voice to players advocating for the creation of a sustainable professional league. Comprised of the world's best female hockey players including 38 Olympians, 60+ members of Hockey Canada and USA Hockey, and National Champions for Canada, USA, Finland and Russia. PWHPA is working to accomplish its mission by coordinating training needs and programming opportunities during the 2020-2021 season and collaborating with like-minded organizations to make hockey more inclusive for women today and for future generations. To learn more about PWHPA and the Dream Gap tour visit www.pwhpa.com.
Post a Comment