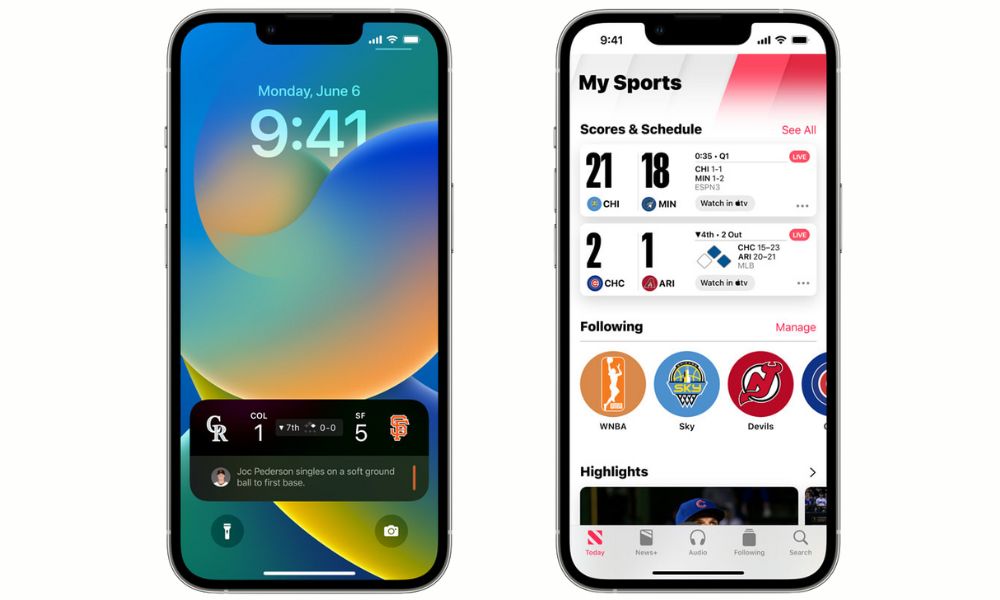 Apple is rolling out a tranche of new features for sports fans to engage with their favourite teams, leagues, and players from directly within the technology giant’s operating systems.

The iOS 16 updates for iPhone, iPad, and Apple TV, were unveiled at the annual Worldwide Developers Conference (WWDC) in California as Apple signalled a continued to push into the sport and fitness space.

The most significant changes announced are affecting the lock screen and notifications, with the updates offering the potential to engage fans even when they’re not actively using their phone. Lock screens can now be customised with widgets that display real-time information, meaning sports organisations and publishers can act as third-party developers to create plugins that offer real-time updates, such as scores or commentary.

The ‘Live Activities’ feature will have strong first-party support too. Apple has added a sports section to its Apple News application, which will display scores, schedules, and league tables for many professional and college sporting competitions.

A user’s favourite teams and leagues are synched across all devices, including Apple TV, to power these ‘Live Activity’ notifications. Apple showed off a widget that had scores and play-by-play action from Major League Baseball (MLB). The technology giant has a long-standing relationship with the North American baseball league and the pair recently signed a broadcast deal to air two exclusive live games live on Apple TV+ each week.

The integration provides also sports publications and rights holders with another avenue to reach fans, as well as generate additional revenue streams, with the potential to tap into Apple News’ more than 125 million subscribers

“Apple News is the number one news app wherever it’s available and it’s about to become amazing for sports fans,” said Rubie Edminson, Apple’s sports editorial manager during the event. “You can now follow your favourite teams and leagues to get stories from hundreds of the best publishers in an all-new section called ‘My Sports’.”

Apple News+ subscribers will receive ‘premium’ coverage from local newspapers and all users will be able to see highlights.

“Now you can catch the best plays from your favourite teams right in your news feed,” added Edmonson, who confirmed ‘My Sports’ would be available in the US, UK, Canada and Australia when iOS 16 launches later this year.

Apple’s Fitness application will be made available to all iPhone users even if they don’t have an Apple Watch. In lieu of a dedicated wearable, the app will take data from the iPhone’s native motion sensors and from third-party applications to track steps, distance, and workouts. The Live Activities framework means this information can be displayed alongside the live sports widgets on the lock screen, if so desired.

Apple’s unique selling point in the mobile market has always been the tight integration of hardware and software. As the smartphone market matured, Apple expanded into other devices and launched new services that have generated subscription revenues that now form a large part of its business, while further tying customers into its ecosystem.

The company has also launched dedicated music, video, news, gaming and fitness services that work across its devices. Now, with the rollout of these new sports-specific features, it is clear there is a concerted effort to make the Apple ecosystem an ideal companion for sports fans.

Native support for scores, news, and highlights can be positioned as a key feature of its products, while also acting as a hub that supports both first-party content and third-party applications, as well as the Apple TV streaming service. Apple could also gain an advantage when shopping for broadcast contracts as it will be able to offer rights holders access to a highly engaged, loyal user base that is more comfortable adopting new features and technologies than users of other technology platforms.