TORONTO, Nov. 3, 2022 /CNW/ - Just a few weeks out from the start of the FIFA World Cup™, today, football superstar Sebastian Giovinco kicked off celebrations in Canada by signing with Budweiser Zero. In line with Budweiser Zero's goal of bringing true friends together for game time, the Italian player joined forces with CF Montreal's Alistair Johnston to launch #ForzaCanada, a rallying cry for fans coast-to-coast. 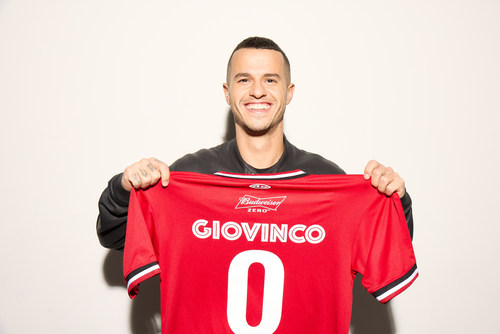 
"Canada is often seen as a cultural mosaic and the nation typically splits their loyalty amongst many countries during the FIFA World Cup," said David Sheedy, Senior Director of Marketing, Budweiser Canada. "Surprisingly this year, Italy did not qualify while Canada is in for the first time in 36 years. We know that Italian football fans in Canada have an incredible amount of passion for football and with many 'Little Italy' communities throughout the country, we wanted to ask them to put their support towards #ForzaCanada, while inspiring the rest of the nation to do the same."

Curiosity was at an all-time high yesterday after Giovinco shared a cryptic social media post [link here] causing fans to question whether the professional football player was announcing his return to the pitch. This morning, Giovinco unveiled the news that he is officially joining Budweiser Zero's Team Zero roster, alongside CF Montréal's right-back, Alistair Johnston [link to post]. Known for being a collective of internationally renowned athletes at the top of their game with zero compromises, Team Zero is expanding in anticipation of FIFA World Cup™. With the first match officially kicking off on November 20th, Budweiser Zero – with Giovinco and Johnston – are encouraging Canadians to get their buds together to support Canada in the country's first FIFA World Cup appearance in over three decades.

"As a proud Italian, football player and soon to be Canadian, I'm excited to join fans and Budweiser Zero in cheering for my – hopefully soon – new home team this World Cup," said Sebastian Giovinco. "While I'm very proud of where I come from, this year is special as it is the first time in many people's lifetimes to get to cheer for Canada, myself included. I'm excited to work with Budweiser Zero to rally Canadians together for this momentous occasion."

Football supporters in the Toronto area have an opportunity to meet Sebastian Giovinco and Alistair Johnston this afternoon, as they make their way to the heart of Little Italy in Toronto to publicly make their announcement.  The newly appointed Team Zero members will be bringing football enthusiasts together to raise one up for Canada and cheers to the upcoming FIFA World Cup™.

Moreover, as Canada takes on the group stage, Giovinco will be catching a game in Little Italy to raise a cold Budweiser Zero to the team and cheer them on. Additionally, Budweiser Zero samples and World Cup merch will be handed out to supporters in the area.

"Budweiser Zero is the perfect drink for Budweiser fans who love the taste of beer but don't always want an alcoholic beverage," said Sheedy. "We know there's nothing quite like sharing a beer with your buds over a game, and the FIFA World Cup™ is the perfect time for Canadians to enjoy a Budweiser Zero. The competition taking place in Qatar means Canadian football fans could be watching matches as early as 5:00 a.m. ET. Budweiser Zero is a great option if you're looking for 'The King of Beers' taste, but without the alcohol."

As an official sponsor of the FIFA World Cup™, Budweiser's celebrations here in Canada are part of a larger global platform, which includes the release of the single The World Is Yours to Take, from the FIFA World Cup Qatar 2022™ Official Soundtrack.

Budweiser Canada has no affiliation with Canada Soccer or the Canadian Men's National Team.

Budweiser – the King of Beers – has been brewed since 1876 under the highest quality standards. Brewed in Canada for more than 35 years, Budweiser uses only the finest ingredients without any artificial ingredients, additives or preservatives. Budweiser is distinguished by its clean, crisp, distinctive flavour, the result of a unique beechwood aging process. As the perception of no- and low-alcohol beer evolves and the category continues to grow, the iconic Budweiser now also offers a new beer to meet consumers' ever-changing preferences: Budweiser Zero.