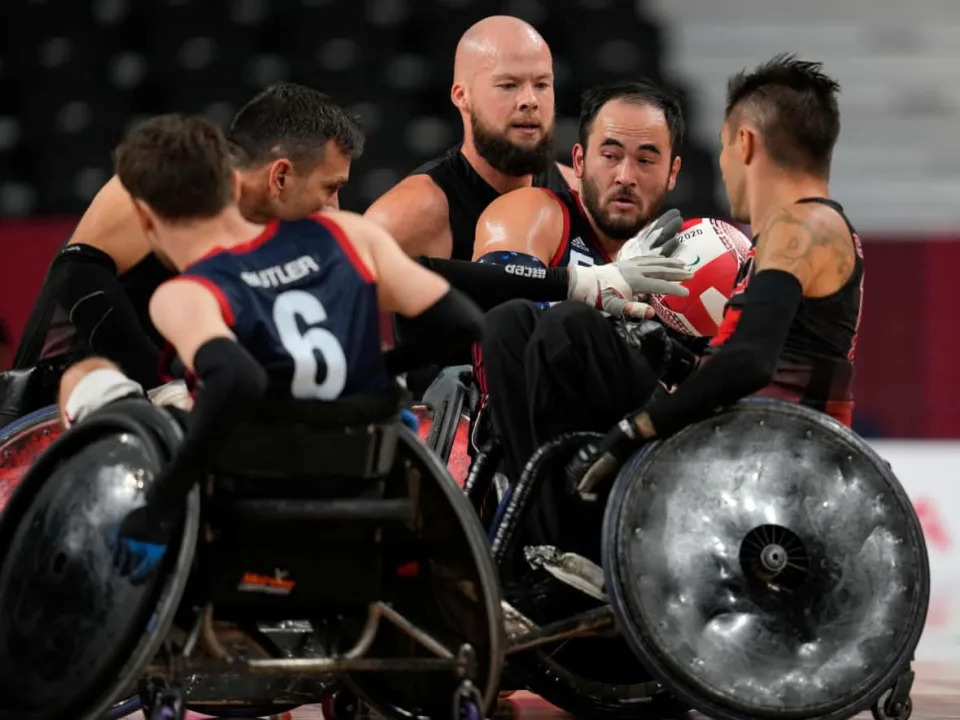 Charles Aoki of the United States, second right, holds the ball under pressure from Zak Madell of Canada, rear, during a match at the Tokyo Paralympics. The Americans beat Canada 53-51 in the quarter-finals of the wheelchair rugby world championship on Friday. (Shuji Kajiyama/The Associated Press - image credit)

Riding high from a victory at the Quad Nations tournament in September, Canada's wheelchair rugby team had high hopes for the world championship in Denmark.

Those hopes were dashed in a 53-51 loss to the U.S. in the quarter-finals on Friday, relegating the Canadians to the seeding bracket and guaranteeing they won't top their fifth-place finish from the Tokyo Paralympics.

But a close game flipped the Americans' way as the third quarter ended, and a two-point difference to begin the final frame proved too much for Canada to overcome.

Canada will return to the court on Saturday to face No. 8 New Zealand for a berth into Sunday's fifth-place game.

The U.S. will now look to add to its record four world titles, though it hasn't won gold at this tournament since 2010. Its last Paralympic triumph came in 2008.

More than 130 players, including a record 13 women — three of whom are members of the Australian team — are competing at worlds.

Canada beat reigning Paralympic champion Great Britain in the Quad Nations final and has demonstrated major growth since the disappointing finish in Tokyo.

But the Americans managed to halt that upward trajectory in heart-breaking fashion on Friday.

Canada's 12-member squad at worlds, which includes 11 Paralympians, also won silver in June at the Canada Cup in Richmond, B.C.

The Canadians won silver at 2014 worlds and are searching for their first world title since 2002.