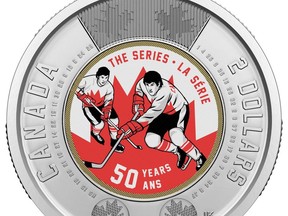 The Royal Canadian Mint is commemorating the 50th anniversary of the Summit Series by issuing a $2 coin, shown in a handout photo, celebrating Canada's hockey triumph over the Soviet Union. THE CANADIAN PRESS.

OTTAWA, ON, Sept. 28, 2022 /CNW/ - Fifty years to the day since the last game was played in an epic clash between hockey superpowers, the Royal Canadian Mint is issuing a $2 circulation coin celebrating the triumph of Team Canada over the Union of Soviet Socialist Republics team (Team USSR) in the 1972 Summit Series.  That hard-fought tournament, where the pride of a nation was on the line at every face off, crowned Canada the true world champion of hockey.  The victory united Canadians in celebrations that, 50 years on, still echo in the hearts and minds of those who experienced that glorious moment in our sporting history.  This special coin will begin circulating today.

"Hockey is a defining aspect of our national Canadian identity, and in 1972 Team Canada helped inspire a generation of Canadians," said The Honorable Chrystia Freeland, Deputy Prime Minister and Minister of Finance. "This new circulation coin may be a small token, but I hope—fifty years later—that it might help to inspire another. And I'm pleased that the net proceeds from the sale of the collector coins commemorating the Summit Series will be donated to the Ukrainian Humanitarian Appeal."

"Many of Canada's commemorative circulations coins celebrate events that have united Canadians in pride and celebration.  The 1972 Summit Series is just such an event, which is why we are proud to commemorate the 50th anniversary of this legendary hockey triumph on a circulation coin," said Marie Lemay, President and CEO of the Royal Canadian Mint. "The Summit Series is a compelling reminder of what Canadians can accomplish when they unite, work hard and persevere.  I hope that this coin will inspire Canadians of all ages, genders and backgrounds, on the ice or in everyday life."

The 1972 Summit Series was an eight-game contest between Canada and the USSR, with games scheduled across Canada and in Moscow. The finest hockey players, from the world's top hockey countries, would face off on the ice to finally determine who could claim the title of best hockey nation on earth.

Names like Esposito, Dryden, Makita, Cournoyer, Mahovlich, Clark, Henderson, Savard and Dionne filled out a star-studded line-up of NHL® players. What was expected to be a rout for Canada turned into a nerve-wracking see-saw battle as the Canadian leg of the series opened with a stunning 7-3 Game One loss for the home team, followed by a win, a tie, and another loss to Team USSR in Game Four.

Players and fans were shaken by the skill and resilience of the Soviet side, but Team Canada vowed to keep fighting.

"Fifty years ago I said that every one of us, all 35 guys, came out for Team Canada because we loved our country," said Hall of Fame member Phil Esposito. "We came because we loved Canada. Today, it holds true. Every one of us is proud of what we did as a team and what we did for our country. The team came together and, importantly to all of us, the country came together."

With 3,000 home fans accompanying them to Moscow for the final four games, Team Canada began its comeback.  Undeterred by a Game Five loss, the team bounced back in the next two match-ups to win through classic team work and a never-say-die attitude.  The title was on the line by Game Eight, as 15 million Canadians tuned in to watch the final showdown.  Down by two goals at the start of the third period, Team Canada never gave up. With the game tied 5-5 and only 34 seconds left before the final whistle, winger Paul Henderson fired a shot heard around the world: the series-winning goal.  Hockey history was made and all of Canada rejoiced.

"Canada's winning goal was the most important goal in hockey history," said fellow team member and Hall of Famer Serge Savard. "If you ask Ken Dryden, or Pete Mahovlich, or Yvan Cournoyer, it's the highlight of our career, even more than winning the Stanley Cups. It's something different. We did it for our country."

The reverse of the 50th Anniversary Summit Series $2 circulation coins was designed by Canadian artist Joel Kimmel. The inner core of the coin features two hockey players representing Team Canada. Set against the team's stylized maple leaf jersey emblem, two charging hockey players are framed by the words "THE SERIES  LA SÉRIE" and "50 YEARS  ANS". The coaches' initials and the jersey numbers of every player surround the core. The obverse still features the effigy of Queen Elizabeth II by Susanna Blunt.

Three million coins have been minted, of which two million feature a fully coloured inner core. These exciting new coins will gradually reach Canadians through their change as bank branches and businesses replenish their inventories of $2 circulation coins.

The Mint is issuing a number of collector coins in support of this historic anniversary.  To add to the meaning of this celebration, all net cash received from the sale of the following collector products will be donated to the Ukrainian Humanitarian Appeal:

The collectibles can be ordered as of today by contacting the Mint at 1-800-267-1871 in Canada, 1-800-268-6468 in the US, or online at www.mint.ca/summitseries. They are also available at the Royal Canadian Mint's Ottawa and Winnipeg boutiques, as well as through the Mint's global network of dealers and distributors, including participating Canada Post outlets.

Images of the circulation coin and collector product are available here.

About the Royal Canadian Mint

The Royal Canadian Mint is the Crown corporation responsible for the minting and distribution of Canada's circulation coins. The Mint is recognized as one of the largest and most versatile mints in the world, offering a wide range of specialized, high quality coinage products and related services on an international scale. For more information on the Mint, its products and services, visit www.mint.ca. Follow the Mint on Twitter, Facebook and Instagram.