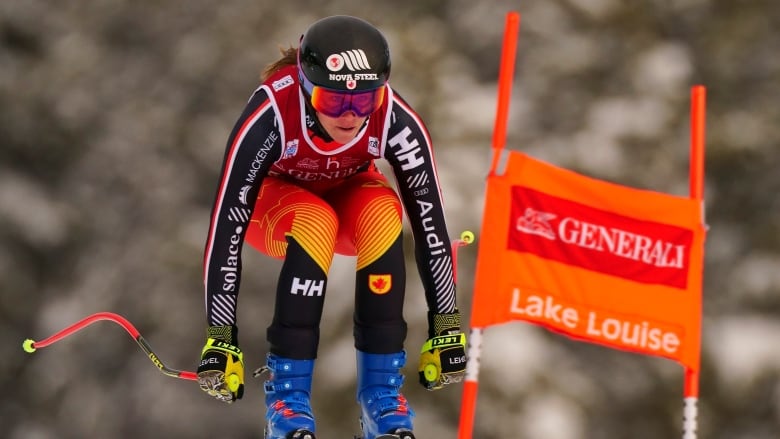 Canada's Marie-Michele Gagnon is seen above during the women's World Cup downhill ski race in Lake Louise, Alta., in Dec. 2019. Alpine Canada's board chair made a personal donation of $1.3 million on Wednesday to national alpine, para-alpine and ski cross racers to reduce the amount athletes pay out of their own pocket to race for their country. (Frank Gunn/The Canadian Press)


Alpine Canada's board chair has made a personal donation of $1.3 million to national alpine, para-alpine and ski cross racers to reduce the amount athletes pay out of their own pocket to race for their country.

Tim Dattels has given Alpine Canada its largest personal philanthropic gift in its history, the organization said Wednesday in a statement.

Dattels of Caledon, Ont., is a partner in the global equity firm TPG and chairman of TPG Asia. He's been Alpine Canada's board chair since 2019.

"We're still asking our athletes to put up anywhere, plus or minus, $30,000 to represent Canada at the highest level," Dattels told The Canadian Press.

"I basically stepped up with this gift because I continue to be frustrated that team fees exist and I wanted to stimulate philanthropy in sport.


Top skiers can get sponsorship deals with gear companies and World Cup prize money is higher than in many winter sports, but ski racing at the highest international level is an expensive endeavour for Canadians because of constant international travel to train and race.

"It's heavy travel because it's largely competed in Europe and they're there almost all winter," Dattels explained. "They're sharing rooms. It's just expensive. There's a lot of rehab to it. Injury rate is very high in the sport.

"I really wanted the athletes to feel that people are focused on them. That goes at all levels from financial sport to safe sport to coaching and doing the best we can for them. There's still lots of wood to chop here but we're getting there."

Dattels, who lives part of the year in Whistler, B.C., represents Canada on the Asia-Pacific Economic Cooperation Business Advisory Council.

Before joining TPG in 2004, he was a partner and managing director for Goldman Sachs. Dattels grew up skiing at the Caledon Ski Club.

Dattels was a personal sponsor of several Canadian skiers before joining the board, including downhillers Marie-Michele Gagnon of Lac Etchemin, Que., and Brodie Seger of Whistler, B.C.

"Tim has kind of become my mentor," Gagnon said. "He's almost like a second dad over the years. When he announced [the donation] I was in tears and I thought it was the most beautiful thing.

"I think everybody could really feel that his support goes far beyond what anyone else has done before.

"I know he wanted this to be a good example to show in Canada, that's what we need. We need philanthropists' help so that we can be competitive. We get government support, which is so amazing, but there is always a gap that happens and it just seems to grow every year because of inflation."


Seger calls the money a game-changer for himself and his teammates.

"This kind of donation is going to allow us to be a world-class program and know that we're going to be able to make it to the end of the season and just focus hopefully more on what we need to do as athletes," he said.

"It's more of a mental burden when you are putting everything you have into your off-season training in the gym, going to camps, flying around the world and grinding on glaciers and trying to get as many runs as you can at high altitude in Chile, and you're also in between trying to figure out how to throw fundraisers and find corporate sponsors.

"Tim wants us to be able to focus on the things that are going to make us faster in the winter."

Cameron Alexander of North Vancouver, B.C., won his first World Cup downhill and Crawford was second in a super-G in Norway in March.

Craigleith near Collingwood, Ont., will be the site of the season-ending ski cross races March 17-19.