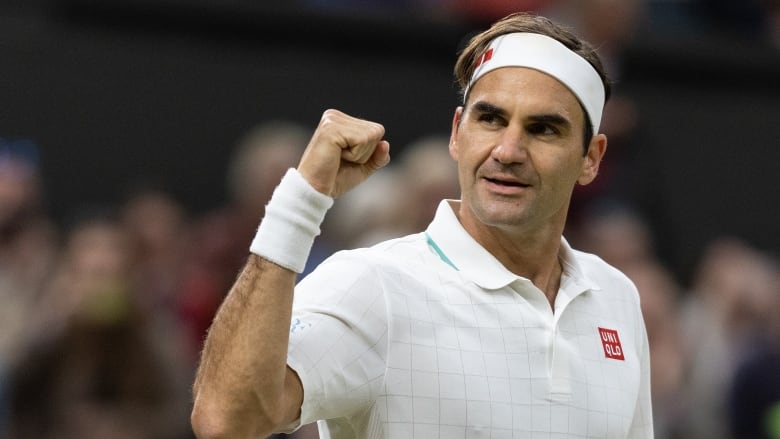 Roger Federer, seen above at Wimbledon in 2021, announced Thursday he would retire from competitive tennis following the Laver Cup. (Simon Bruty/AELTC/Getty Images)


Roger Federer is retiring from professional tennis at age 41 after a series of knee operations, closing a career in which he won 20 Grand Slam titles, finished five seasons ranked No. 1 and helped create a golden era of men's tennis with rivals Rafael Nadal and Novak Djokovic.

Federer posted what he called a "bittersweet decision" via both a written statement and an audio clip on Thursday, less than two weeks after 23-time major champion Serena Williams played what is expected to be the last match of her career.

Combined, the exits by two of the greatest athletes in their sport's history represent a significant turning of the page.

"As many of you know, the past three years have presented me with challenges in the form of injuries and surgeries. I've worked hard to return to full competitive form," said Federer, who is home in Switzerland. "But I also know my body's capacities and limits, and its message to me lately has been clear."

Federer has not competed anywhere since Wimbledon in July 2021, and so, in that sense, his news is not all that surprising.

But he had appeared at an event marking the 100-year anniversary of Centre Court at the All England Club this July and said he hoped to return to play there "one more time."

He also had said he would return to tournament action in his home country at the Swiss Indoors in October.

In Thursday's announcement, Federer said his farewell event will be the Laver Cup in London next week. That is a team event run by his management company.

"I knew a few weeks ago that his rehabilitation with his knee wasn't going as well as he had hoped. A few weeks after Wimbledon, he informed me that the knee was not reacting as well as it should and that he was thinking about figuring out a way to end his career," Tony Godsick, Federer's agent since 2005, said in a telephone interview Thursday.

"I had suggested to him years ago that he should stop. Not many tennis players at his level push into their 40s. But he was always interested in challenging himself," Godsick said. "And at the end of the day, after 1,500-plus matches, the tires finally wore out. And he's got things to do in his next stage."

Federer and his wife, Mirka — a tennis player, too; they met as athletes at an Olympics — have two sets of twins, girls who are 13 and boys who are 8.

Federer leaves the sport with a total of 103 tour-level titles on his substantial resume and 1,251 wins in singles matches, both second only to Jimmy Connors in the Open era, which began in 1968. Federer's records include being the oldest No. 1 in ATP rankings history — he returned to the top spot at 36 in 2018 — and most consecutive weeks there (his total weeks mark was eclipsed by Djokovic).

The dominance Federer displayed at the height of his powers is unrivaled, including reaching 10 consecutive Grand Slam finals, winning eight, from 2005-07, a run that also extended to 18 of 19 major finals into 2010.

In a sport where changes in surface and other conditions can make even the best players thrilled with a showing here or there into the second week of a Slam, Federer compiled streaks of 36 quarter-finals in a row and 23 semifinals in a row from 2004 to 2013.

"Roger Federer is a champion's champion. He has the most complete game of his generation and captured the hearts of sports fans around the world with an amazing quickness on the court and a powerful tennis mind," Hall of Famer Billie Jean King said. "He has had a historic career with memories that will live on and on."

When Federer won his first Grand Slam title at Wimbledon in 2003, the men's record for most major trophies was held by Pete Sampras, who had won his 14th at the U.S. Open the year before in what turned out to be the last match of the American's career.

Federer would go on to blow way past that, ending up with 20 by winning eight championships at Wimbledon, six at the Australian Open, five at the U.S. Open and one at the French Open. His 2009 trophy at Roland Garros allowed Federer to complete a career Grand Slam. 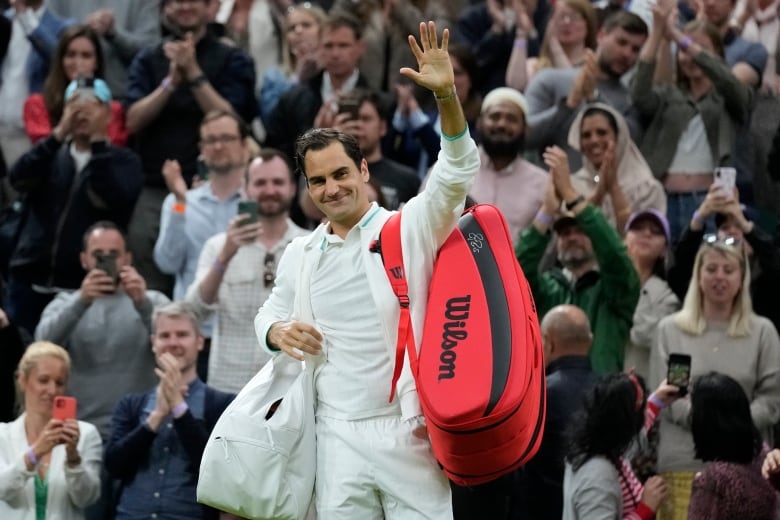 Federer leaves the court after a victory at Wimbledon in 2021. (Kirsty Wigglesworth/The Associated Press)

His serving, forehand, footwork and attacking style will all be remembered. Also unforgettable were his matches against younger rivals Nadal, 36, and Djokovic, 35, who both equalled, then surpassed, Federer's Slam total and are still winning titles at the sport's four biggest tournaments.

"I wish this day would have never come," Nadal said. "It's a sad day for me personally and for sports people around the world. I said it to you when we spoke and now it's here. It's been a pleasure but also an honour and privilege to share all these years with you, living so many amazing moments on and off the court."

Nadal now leads the men's major championship count with 22, one ahead of Djokovic.

"I was lucky enough to play so many epic matches that I will never forget," Federer said in Thursday's announcement.

Addressing his "competitors on the court" — although not by name — he wrote: "We pushed each other, and together we took tennis to new levels."

Soon after, Federer had surgery to repair damage to his meniscus and cartilage in his right knee — his third operation on that knee in a span of 1-½ years.

"Tennis has treated me more generously than I ever would have dreamt," Federer said Thursday, "and now I must recognize when it is time to end my competitive career."