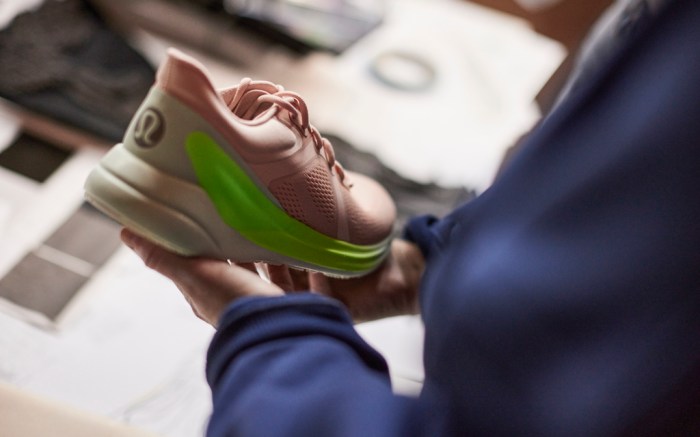 Lululemon isn’t just about leggings anymore.
The company has a goal to hit $12.5 billion in net revenue by 2026. And creating new products is a key part of getting there.
The Vancouver, British Columbia-based athleisure brand on Thursday announced better-than-expected results for the second quarter, with net revenues up 29% to $1.9 billion. In a call with investors discussing the results, Lululemon CEO Calvin McDonald said these results are a testament to the brand’s “Power of Three ×2” strategy, a five-year plan that aims to double business from 2021’s net revenue of $6.25 billion to $12.5 billion by 2026 via new products and other initiatives.
In addition to footwear, which launched earlier this year, Lululemon is looking to win over more customers by expanding beyond its traditional core categories and capitalizing on pandemic-fueled trends within sports and movement.
“Our strategy is to solve for our guests’ unmet needs across their secondary sweat activities such as golf, tennis and hike,” McDonald said in the call. “We roll out targeted innovations while also leveraging the versatility of our core assortment.”
Within hike, which rolled out in Q2, Lululemon said it has already seen a positive reaction to the assortment in line with the growth in the activity throughout the pandemic. Lululemon also noted the success with its launch of its proprietary fabric technology called SenseKnit for zone compression while running.
However, Lululemon’s launch into footwear in March was arguably the brand’s most notable product innovation this year. The collection, which utilized a women-first approach to create a shoe specifically designed for the female foot, launched with a running shoe in March. A training shoe and a recovery slide rolled out a few months later.
McDonald said in Q1 that the launch of the Blissfeel running shoe was so successful, that demand for the new products in Q1 were in excess of supply and “far exceeded” the company’s expectations. Since then, the inventory position has improved.
Moving forward, the brand plans to launch another female silhouette, a technical training shoe, and a men’s footwear line, which is slated for 2023.
According to managing director of GlobalData Neil Saunders, Lululemon’s footwear launch has “shown a strong start in a market that is still dominated by the big sneaker brands.” He added that the brand’s core consumer base will help it develop a “strong niche” in the footwear space.
McDonald also mentioned the potential to increase guest acquisition via expanding offerings within accessories, such as in bags, backpacks and socks, noting the success of the lower-priced and popular “Everywhere belt bag.”
“We’re excited about the opportunity in our accessories business and definitely have plans across a number of the categories,” McDonald said.
Post a Comment