After winning a gold medal in women's hockey and breaking the points record at the 2022 Beijing Olympics, the Dulcedo talent graces the cover along with Anaheim Ducks player Trevor Zegras 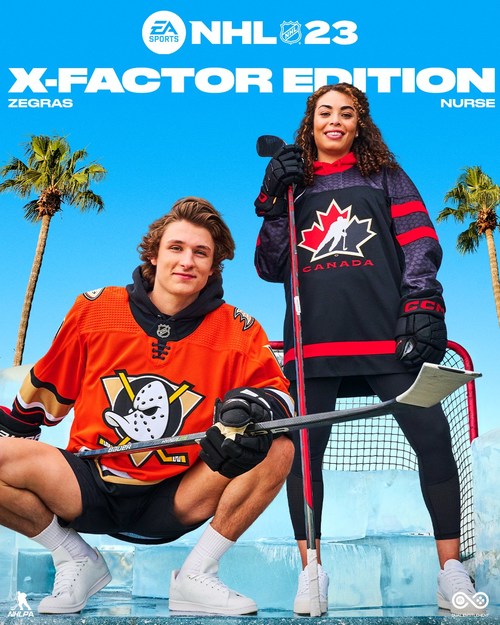 MONTRÉAL, Aug. 25, 2022 /CNW/ - For the first time ever, a woman will grace the cover of EA SPORTS NHL video game with NHL 23. Olympian Sarah Nurse, who broke the record for most points in a single Olympic tournament (five goals and 13 assists) helping Team Canada to secure Olympic Gold at the 2022 Olympics in Beijing, now adds video game cover star to her extensive resume.

Nurse shares the cover of the NHL 23 game with NHL player Trevor Zegras of the Anaheim Ducks. "It is such a tremendous honor to be the first woman on the cover of the EA SPORTS NHL franchise," says Nurse, who has been with Dulcedo since 2018.

How this vision came to life is solely at the hands of one man, Dulcedo Sports & Entertainment senior agent Thomas Houlton. "In the latter part of 2021, I helped negotiate a licensing agreement between EA and Hockey Canada to include women in the NHL 22 video game for the first time ever," says Houlton. "The public reception was incredible and Sarah and I forged a strong relationship with EA SPORTS through that partnership."

This partnership provided a gateway to bigger aspirations. "I kind of jokingly said to a representative at EA, that our next conversation would need to be about landing the cover," laughs Houlton. Lo and behold, an Olympic Gold medal, and a tournament points record later, EA SPORTS called up Houlton to say they wanted Nurse to be the first woman on the cover of the NHL video game. And the rest is history as they say.

Though diversity is an important matter in mainstream these days, sports has seemed more careful lately when broaching this topic. "Having not only a woman but a woman of color on the cover of a video game in a male-dominated sport will have unfair criticism, so we applaud EA SPORTS for blazing a trail and taking a strong stance on being pro-diversity and inclusion, something that we take seriously at Dulcedo," says Houlton.

Nurse represents a double minority in the world of hockey as a woman of color but that is an element she prides herself on. "The thing I am most proud about with this campaign is the long lasting impact it will have on the next generation of female hockey players," says Houlton. "Every partnership with Sarah serves a greater purpose, to inspire those she is paving the way for. If young girls can see it, they can dream it, and ultimately be there one day," stresses Houlton. "Also, as a woman of color in hockey, Sarah has long been a champion of diversity and inclusion and I am so humbled to represent someone who is proud to carry that responsibility on her shoulders. She is unapologetically herself."

About Dulcedo: Founded in 2008, in Montréal, Dulcedo Management Group is a global multi-disciplinary talent management agency with head offices in Montréal and Toronto with a talent roster from all over the world. Dulcedo currently has four branches, representing talents within the Modeling, Sports, Influencer, and Gaming industries. Visit www.dulcedo.com to learn more.