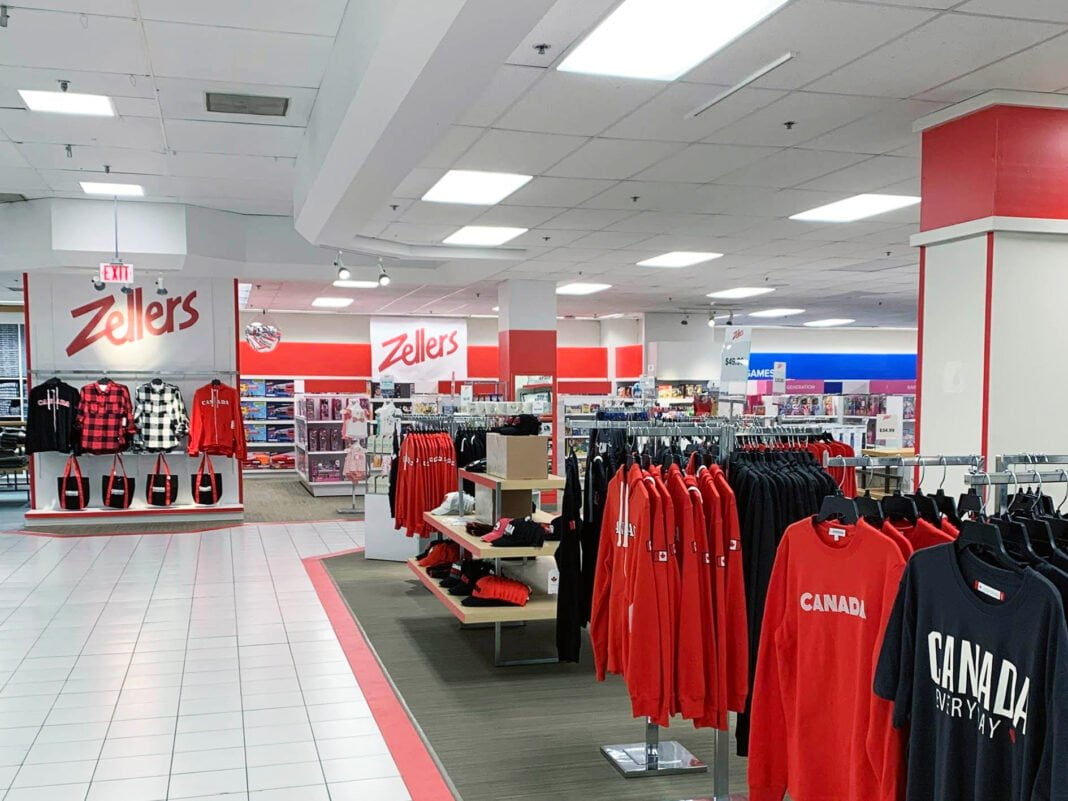 
Included in the new rollout will be physical Zellers stores within existing Hudson’s Bay department store locations in Canada, as well as a website that will include a marketplace component.

The new physical Zellers concept stores will open in early 2023 according to the Hudson’s Bay Company. And it appears that the store expansion will involve opening Zellers locations across Canada. In a statement, Hudson’s Bay said that it would leverage its “nationwide network of prime brick-and-mortar Hudson’s Bay locations as it expands its footprint in major cities across the country.”

One of the goals of the new Zellers concept is to create a “digital-first shopping journey that taps into the nostalgia of the brand Canadians know and love” while at the same time, a “refreshed identity” will be presented for the new Zellers. A “unique and exciting product assortment for families at everyday value” will be part of the mix, indicating that pricing for the Zellers stores will be at the lower-end similar to the previous Zellers stores that Canadians know from years ago. 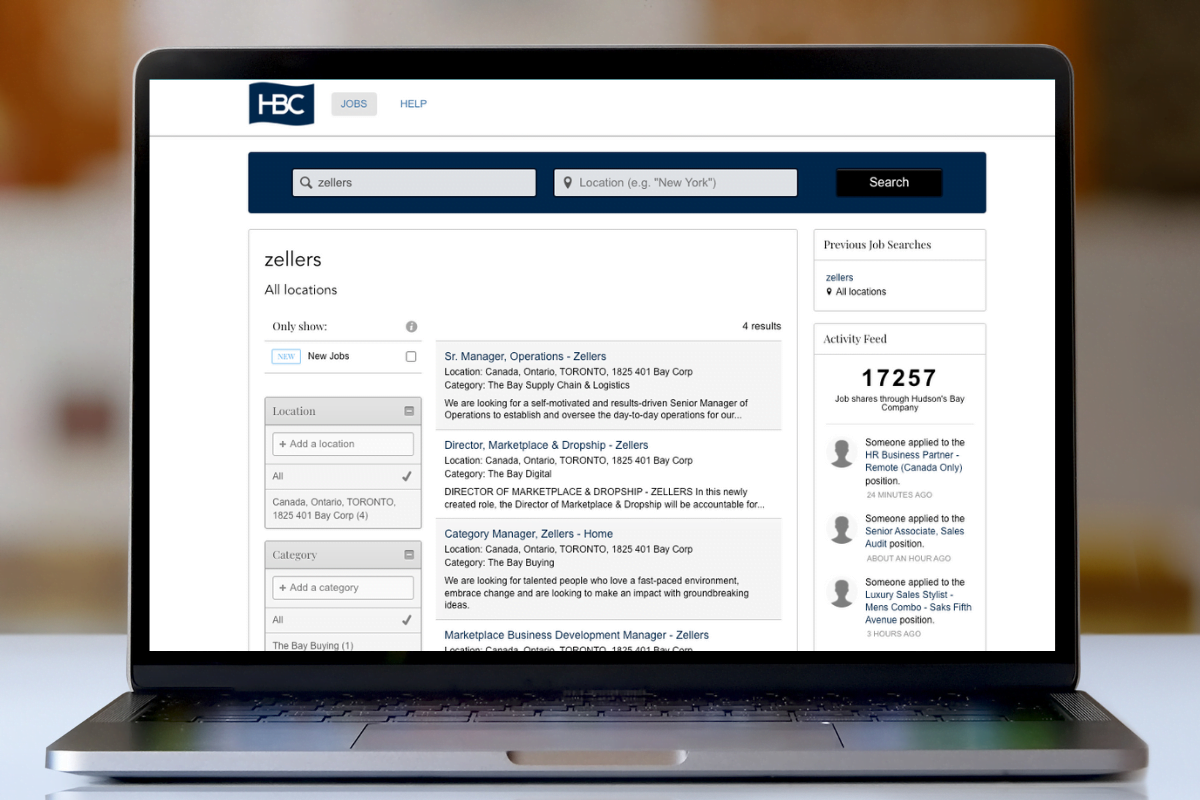 Image: mycareer.hbc.com
With that, a value-driven private-label brand will be launched at Zellers that will be “design-led” according to the Hudson’s Bay Company. The new Zellers will sell housewares and home décor, furniture, small appliances, toys, and pet accessories. Apparel will also be introduced along with other categories as time goes on with an assortment of products added to stores as they are developed.

“Where the lowest price is the law” was a calling card, which has helped Zellers establish itself as more than a retail destination, but a place to build and support community,” says Adam Powell, Chief Business Officer, Zellers. “Zellers is a brand deeply rooted in the Canadian experience. Spanning generations, people hold distinct connections to Zellers through shared experiences with family and friends, and we look forward to building on that in the future.”

The Zellers.ca website will also be launched and is expected to include a marketplace component, as per a trademark application several months ago. And if the website portal takes off, it’s possible that the Hudson’s Bay Company could eventually spin off its online Zellers business into its own business as has been the case with ecommerce sites for Hudson’s Bay (TheBay.com), Saks Fifth Avenue and Saks OFF 5TH. 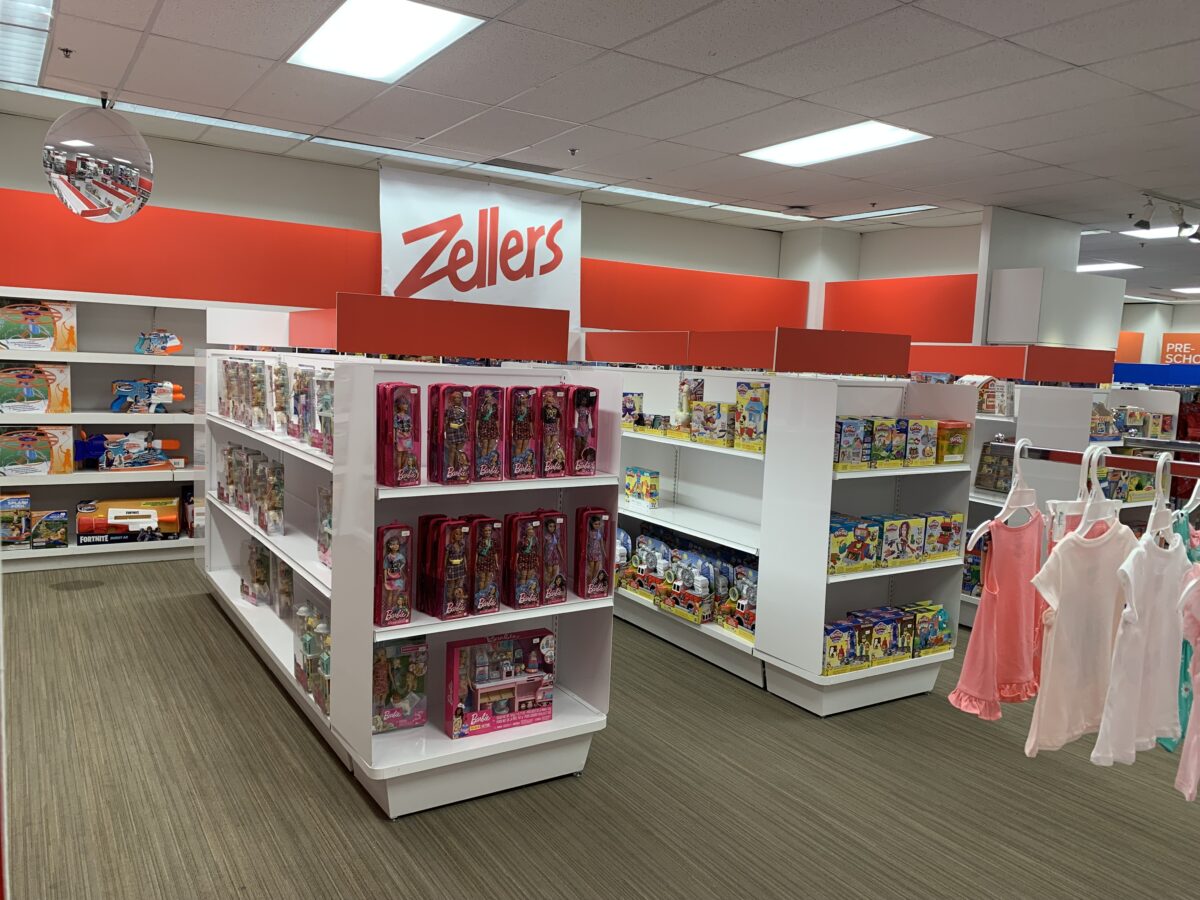 Trademarks for Zellers stores were also registered, prompting a reader to notify Retail Insider months ago that something was at play with the Hudson’s Bay Company. Hiring was also starting to take place including various Zellers management roles.

The Zellers shop-in-stores featured a range of products including Canada-themed apparel and home goods. Red floor tape indicated the boundaries of the Zellers spaces within the Hudson’s Bay stores.

Zellers became an iconic retailer in the eyes of many Canadians while it operated in its previous format. That included Zellers mascot Zeddy which was for years part of the retailer’s marketing, and it likely won’t be part of the new Zellers relaunch. In 2012 Zeddy was ‘adopted’ by Camp Trillium after fans voted in Zellers’ final Facebook campaign EVERYTHING MUST GO!, marking an end to almost three decades with his Zellers family.

The Hudson’s Bay company operated a network of Zellers stores across Canada for decades. In January of 2011, the Hudson’s Bay Company announced that it would sell the leases for up to 220 Zellers stores to Minneapolis-based Target for $1.825 billion dollars. HBC retained 64 locations initially and liquidated the chain in early 2013. After a disastrous run in Canada, Target exited its Canadian stores in early 2015 amid billions of dollars in losses.

The Zellers name wasn’t dead in Canada following the Target sale however. The Hudson’s Bay Company operated two Zellers stores in Ontario until early 2020, and those locations acted more as clearance centres for products from Hudson’s Bay store.

At its peak in the 1990s, Zellers had over 350 stores in Canada. The entry of Walmart into Canada is said to have impacted Zellers’ sales particularly in the early 2000s which resulted in the retailer losing significant market share.

In the 1980’s, Zellers’ marketing slogans included “Only you’ll know how little you paid” and “Shopping anywhere else is pointless”. In the late 1980’s and early 1990’s the popular “Where the lowest price is the law!” was used in Zellers advertising. Included were animated commercials featuring Batman and Robin with the villains like the Joker, the Penguin, Catwoman and the Riddler.


Value-priced Zellers was founded by Walter P. Zeller in London, Ontario, in 1931.

The Hudson’s Bay Company acquired Zellers in 1978. The Zellers logo, visible on the last two remaining stores, was adopted in 1975. In 1976, Zellers thrived with sales in excess of $400 million annually and in the same year, discount chain Fields acquired the Zellers chain. Joseph Segal, who at the time was president of Fields, became president of Zellers as part of the transaction. Segal died at the age of 97 in May of this year.

In 2008, the Hudson’s Bay Company and its subsidiaries, including Zellers, came under the ownership of NRDC Equity Partners, which was headed by Richard Baker. Hudson’s Bay’s namesake stores were positioned as more upscale under the creative direction of retail veteran Bonnie Brooks, while Zellers was seen as a drag on the business.

We will update this article when we have more information on the Zellers relaunch in Canada.