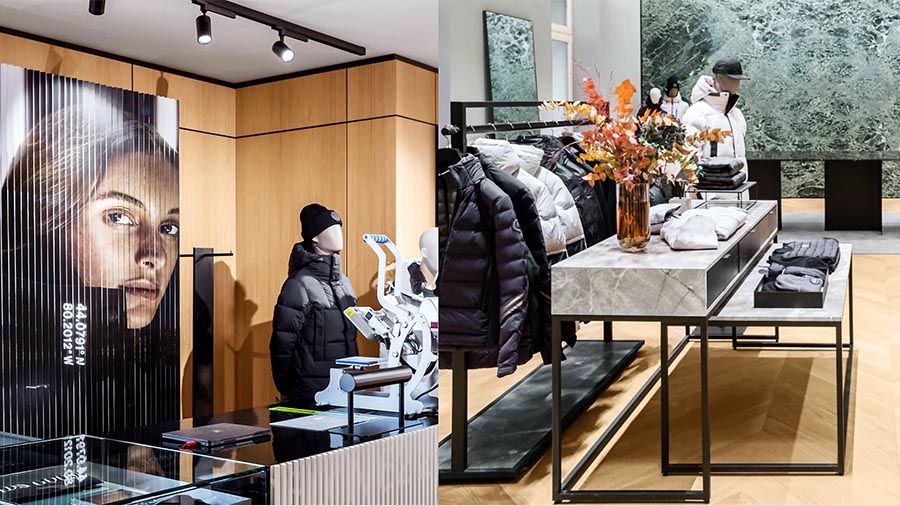 “From a macro perspective, I think it is important we acknowledge the concerns of the global recession and the uncertainty and volatility of today’s world; however, at Canada Goose, as of today, we have not seen signs of slowing demand,” said Reiss on a conference call. “I think it’s also important to highlight the strength of our performance through previous recessions. Canada Goose has grown substantially through every recession, save the first wave of COVID. I believe this is a testament to our products grounded in performance and functionality as well as our brand, our luxury positioning and the brand heat our teams continue to drive around the world.”

In the quarter, revenue* jumped 24.2 percent on a reported basis to C$69.9 million and 24.0 percent on a constant-currency basis. Sales exceeded Canada Goose’s guidance calling for sales between C$60 million and C$65 million.

Sales to the EMEA region were up 37.4 percent (53.1 percent currency-neutral) to C$20.2 million, primarily driven by retail network expansion and stores that were open in Q123 but had experienced closures due to COVID-19 restrictions in the comparative quarter.

Sales to the Asia Pacific region were down 28.1 percent (35.3 percent currency-neutral) to C$16.1 million as eight out of 16 stores in Mainland China experienced closures due to COVID-19 restrictions in Q1 2023. All stores in the region reopened as of the end of June.

Revenue in Japan was minimal compared to Q122 revenue of C$9.3 million as revenue recognition in this market will shift to later in the year due to the creation of Canada Goose Japan Joint Venture with Sazaby League, Ltd. on April 4, 2022. The Japan Joint Venture agreement replaced an exclusive national distributor arrangement between Sazaby League, Ltd. and Canada Goose.

Gross profit in the quarter improved 39.1 percent to C$42.7 million, attributable to higher revenue and gross margins expanding 660 basis points to 61.1 percent. Due to increased production efficiencies, margins were favorably impacted by pricing and lower product costs. Wholesale gross margin also benefited from product mix driven by higher parka sales on requests for earlier shipments compared to Q122. These benefits were partially offset by an unfavorable region mix with higher North American revenue and lower revenue in the Asia Pacific and an unfavorable impact from the fair value inventory acquisition adjustment related to the Japan Joint Venture.

The wider operating loss was due to the timing of C$12.6 million in marketing investments, which occurred earlier in the year compared to fiscal 2022, to drive brand heat ahead of its peak season, C$6.9 million in higher costs related to opening new stores and running stores at full capacity, C$3.8 million investment in strategic initiatives including digital, and C$2.9 million in costs to support the new Japan Joint Venture.

The adjusted net loss was 56 cents against a loss of 46 cents a year ago and below Canada Goose’s guidance, calling for a loss in the range of 64 cents to 60 cents.

“We are very happy with the trajectory of our business as we move into the fall season,” said Reiss. “North America continued to be a standout market for our brand. As of June, our stores in Mainland China have all reopened, and we see positive signals as consumers are returning to stores. In addition, our Made In Canada model continued to help insulate gross margins for us at a time when others are seeing erosion.”

In the quarter, comparable sales growth across its DTC business was 10.7 percent, reflecting strengthening traffic trends and enhanced store productivity.

“North America performed very well, and we see no signs of slowing demand,” said Reiss. “The U.S. continued to show significant gains on top of those made through the pandemic, with Canada’s trajectory surpassing the U.S. this quarter. The U.S. has tremendous space to grow our store network and expand our customer base.”

Canada Goose opened its first California location in South Coast Plaza last October, followed by a pop-up store in Seattle’s Bellevue Square last November. New stores this year are planned for Las Vegas at The Shops at Wynn and Denver at Cherry Creek, opening by the end of this calendar year. More openings in the U.S. are planned for 2022.

“With just 43 stores globally, we have so much room to grow our retail store network,” said Reiss. “We approach new locations strategically and deliberately, placing our stores in some of the most preeminent shopping destinations in the world. Brick-and-mortar remains a key strength for our business, meaningful touch points for our customers and an opportunity for growth as we move forward.”

In Europe, Canada Goose has seen a return in tourism, with France seeing signs of improvement. In Germany and the U.K., where Canada Goose has the highest concentration of stores in the region, tourism is also recovering, albeit at a slower rate. Six stores opened in the EMEA during the pandemic, and “they are finding their momentum after a few volatile years,” said Reiss.

In the Asia-Pacific, positive momentum has occurred as stores have reopened. Four stores are scheduled to open in China in fiscal 2023. Reiss said, “We remain cautiously optimistic in Mainland China, given the proven resilience of the consumer and due to the operating environment we see today.”

In other newer markets, two stores will open in Japan by the end of the calendar year as part of its new joint venture. In South Korea, a new distributor Lotte Group, was retained to tap the “incredible amount of white space” in the country. Reiss said, “For both Korea and Japan, we envision multiple new store openings over the next 3-to-5 years as well as dedicated e-commerce capability in both markets, which will drive DTC growth in our APAC region.”

Reiss said, “That’s the highest percentage of non-heavy weight down that we have ever realized; this is just a snapshot of one quarter, but this gives us confidence in our ability to expand new categories successfully.”

In September, Canada Goose will launch a collection for women that “combines style, performance and versatility” and backed by the brand’s first all-female global campaign. Reiss said, “We have a tremendous opportunity with our women’s business as we continue to evolve and expand our offering.”

Regarding margin expansion goals, Canada Goose predicts consolidated gross margin will be in the high-60s as a percentage of total revenue for fiscal 2023, with expansion driven by the DTC mix shift.

“We have a long history of taking price in excess of cost inflation, and that is grounded in the quality and functional value that our products provide,” said Jonathan Sinclair, CFO, Canada Goose. “Our differentiated operating level as a vertically integrated manufacturer and with most products made or purchased in Canada, and higher average unit prices also help to mitigate some of the inflationary pressures.”

Inventory was up 24.8 percent to C$504.7 million at the quarter’s close. Of the increase, C$27.3 million was acquired when entering the Japan Joint Venture.

Canada Goose maintained its guidance for the fiscal 2023 year. The outlook calls for:

*All amounts are in Canadian dollars. Photo courtesy Canada Goose/Berlin