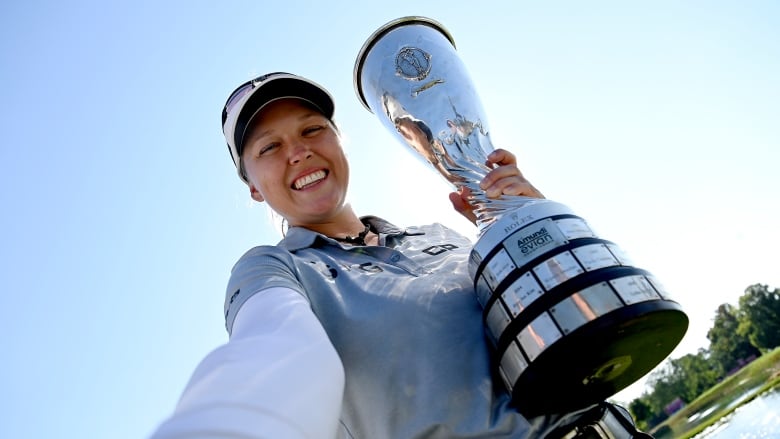 Canada's Brooke Henderson celebrates her victory at the Evian Championship in July. She'll go for her third career major when the Women's British Open begins on Thursday. (Stuart Franklin/Getty Images)


When Brooke Henderson won the Evian Championship in July, her place in Canadian golf lore was cemented.

Henderson's first major title came at the Women's PGA Championship in 2016, when she was just 18 years old.

She owns 10 other career tour wins, including at the ShopRite LPGA Classic in June. Her 12 total titles are more than any Canadian pro golfer in history.

She's twice competed at the Olympics.

By the numbers — and here's where we place the caveat that you can't compare eras, or that it's impossible to weigh Henderson's two majors against, say, Mike Weir's Masters victory — Henderson is the greatest Canadian golfer of all-time.

"If she did nothing else in golf, if she walked away tomorrow, which isn't going to happen, she's already had a tremendous career," said Lorne Rubenstein, a longtime golf columnist for the Globe & Mail who now writes for ScoreGolf.

On the contrary, tomorrow Henderson will dive right back into another major at the Women's British Open at Muirfield in Scotland.

Henderson's ninth title at the Meijer LPGA Classic in June 2019 put her in sole possession of the Canadian record, surpassing Weir and Canadian golf icons George Knudson and Sandra Post.

"I truly believe that records are made to be broken," Post told The Canadian Press after Henderson's 2019 win. "My last win was in 1981, which was another century. I think it's long overdue. No matter who came up after me, I always wished they would do better than me."

Not only is Henderson among Canada's golf greats, she's also one of the most successful individual Canadian athletes currently plying their trade. Tennis, given its format, is probably most comparable to golf — 22-year-old Bianca Andreescu's one major among three titles falls short of Henderson.

Two other Canadian superstars emerged in 2016: Penny Oleksiak and Andre De Grasse. Their resumés are comparable to Henderson's. Oleksiak is Canada's most decorated Olympian, but her seven medals include just one gold; of her nine worlds medals, none are gold.

De Grasse's Olympic 200-metre gold may tip the scales in his favour, to go with five other Olympic medals and five more podium appearances at worlds, including the recently won 4x100m relay gold.

Golf doesn't award medals for second- and third-place, but Henderson does have 68 career top-10 finishes.

In any case, the difference between Henderson and established Canadian superstars like Andreescu, Oleksiak and De Grasse is closer than you may expect.

What they all share in common is the ability to perform when it matters most.

After becoming the first golfer in LPGA history to open a major with two rounds of 64 at the Evian Championship, Henderson slowed down on Saturday, and fell out of the lead at one point on Sunday.

On the sixth hole, the Canadian even four-putted for double-bogey, the championship slowly slipping from her grasp.

But Henderson flipped the script on the back nine, birdieing three of the final five holes, including a clutch putt on 18 to seal the deal.

"Her resilience and her resourcefulness was really off the charts. And then to come down the stretch knowing she needed to birdie the last hole and make that putt right in the middle of the hole from, I don't know, about 10 feet to win it. It was all really just terrific, really," Rubenstein said.

Between the early-round dominance and the final-round scrappiness, Henderson displayed all the tools necessary to win consistently on the LPGA Tour.

"Going into the back nine, the saying is that majors are won on the back nine on Sunday so I just tried to keep that frame of mind and knew I was still in it if I had a solid back [nine]," she said after her victory.

Given her age and the ability to stay relevant in golf into one's 40s, there is no projecting what Henderson's career may wind up looking like when all is said and done.

"I think the enthusiasm is very, very important. As long as she can maintain that, I think it's likely that she'll continue winning. But I would never say it's a sure thing because golf is just not like that," Rubenstein said.

Rubenstein noted the cases of Annika Sorenstam and Lorena Ochoa, two highly successful golfers who retired young, as examples that show Henderson may have less runway than some may assume.

Henderson's next challenge in Scotland promises to be tough. She didn't play the Scottish Open, where fellow Canadian Maude-Aimée LeBlanc notched a top-10 finish of her own.

"Most players have to learn how to play links golf. But having said that, she's such a brilliant player and a fast learner that she could just do just fine. But we'll see."

Her previous best finish at a British Open came in 2018 when she tied for 11th.

But with a pair of wins, including one major, already in her pocket for 2022, there's no reason Henderson won't contend once again.

"She came out and she won once, and now she's won again [at the Evian Championship]. So everything she's doing points to a long and successful career," Rubenstein said.