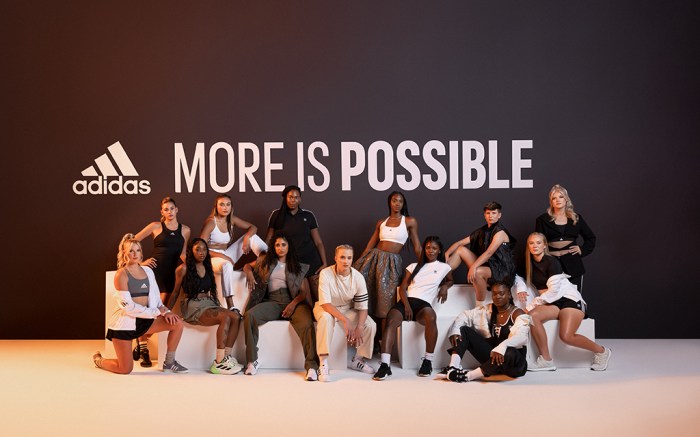 Title IX is now 50, and Adidas is celebrating in a major way.

“As a leading global sports brand, we’re focused on creating long-term equity in sport. That means both investing in the next generation of athletes today and also supporting them in the future,” Adidas North America president Rupert Campbell said in a statement. “We welcome this group of powerful student-athletes to the Adidas family and look forward to working alongside them to define what is possible for the future of sport.”

In a statement, Adidas said it will continue to invest in athletes and programs that will increase representation and visibility, and is committed to creating a more progressive future of equity in sport.

“There is no place in sport for discrimination and we continue to see far too many instances of it today and the heavy impact it has on young athletes,” King said in a statement. “The investment in women and LGBTQI+ athletes is a genuine push to accelerate the success and well-being of all athletes and I’m proud to be involved as part of the adidas family in this step towards long-term equity.”

To further celebrate the 50th anniversary of Title IX, Adidas has revealed multiple initiatives and commitments that it said are aimed at “creating a more equitable and inclusive future of sport.” Included in these initiatives is an expanded partnership with nonprofit LGBTQ athletic advocacy group Athlete Ally to grow chapter footprints on college campuses.

With the expanded footprint, Adidas said the partnership with Athlete Ally will drive education, policy reform and the organizing of student-athletes “to spur equity on campus and in sport.” Through these chapters, the two will “encourage fans, athletes and students to engage in open conversations about fostering acceptance and allyship in sports.” What’s more, Adidas said the partnership will also yield the inaugural Athlete Leadership Summit with Athlete Ally at a partner campus, which will bring together athlete ambassadors, athletic departments, student-athletes and advocates “to discuss progress and the next steps in driving inclusivity nationwide.”

“I started Athlete Ally as a college wrestler, and I have seen firsthand the power of college athletes to model allyship and respect for their coaches, teammates and fans,” Athlete Ally founder and executive director Hudson Taylor said in a statement. “By equipping college athletes with the tools to champion LGBTQI+ inclusion on and off the playing field, Athlete Ally and Adidas are working to shape the future of sport into what we know it can and should be. We are incredibly grateful to Adidas for this partnership.”

Also, Adidas revealed it has launched a mentorship program — with help from WNBA star Candace Parker — that provides newly signed student-athletes with guidance as they navigate the NIL era.

“I have the incredible opportunity to pay it forward with the next generation of athletes,” Parker said in a statement. “I am so happy to be partnered with adidas who is aligned with my commitment to developing this mentorship program which will set these extraordinary student-athletes up for greatness in sport and life.”

Adidas is further celebrating the announcements with a footwear giveaway. The giveaway will feature shoes signed by the aforementioned 15 student-athletes that will run from July 27 to Aug. 3.