A four-day camp, 416 kids aged 8-14 (104 campers per day) will sharpen their basketball skills and engage in meaningful discussions around teamwork, diversity and the importance of embracing their community. 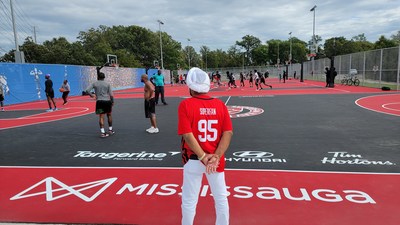 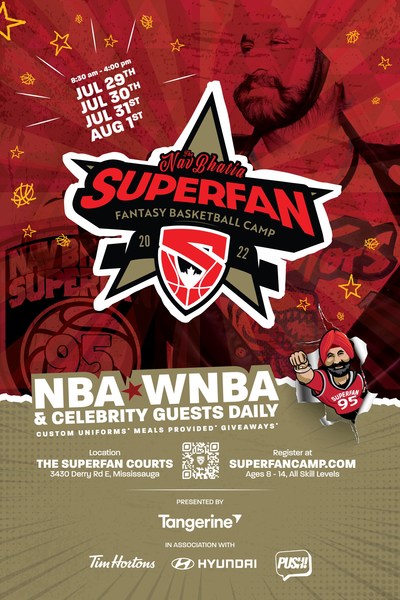 Setting this camp apart, the Superfan looks to deliver an NBA style experience for all campers. From receiving full basketball uniforms, breakfast (courtesy of Tim Hortons), lunch (courtesy of Paramount fine foods), snacks and a backpack full of gifts, campers will be in awe as they meet many of their favorite players from the NBA, WNBA and celebrities known to show up courtside with Nav.

"This is the first camp of what I expect to be an annual event. I hope the kids and their parents enjoy an experience like they have never witnessed before," said Nav Bhatia. "I have personally invited many of my NBA/WNBA friends and other celebrities to be a part of this year's event in Malton. They will be inspired by their basketball heroes and live out their dream of being drafted into the NBA/WNBA."

Kids residing in Malton have an opportunity to attend the camp for free through a lottery system by registering before July 20, 2022. The winning entries will be drawn at random by Nav Bhatia on July 22, 2022.

Registration for the camp begins July 12, 2022 at www.superfancamp.com

The Superfan Nav Bhatia Foundation is saving campers $100 off registration by offering an early bird registration fee of $195 using the promo code SUPERFAN (for a limited time).

In February 2020, Raptors Superfan Nav Bhatia donated $150,000 towards the renovation of the basketball courts at Paul Coffey Park. After months of construction and rebuilding, the courts launched in September 2021. This development provided an opportunity for the Superfan Nav Bhatia Foundation to promote its goal of uniting "people of all ages and backgrounds through the game of basketball."

These courts will also be hosting the first of many Superfan Fantasy Basketball Camps. To reach this goal, the Foundation teamed up with Gold sponsor, Tangerine Bank, as part of their ongoing commitment to empowering youth in their communities through Tangerine Project Forward™.

"We're excited to be able to support this program and the courts as a hub for the community," said Eric Nachman, Director of Marketing Partnerships, Tangerine Bank. "As interest in basketball continues to expand in Canada, these courts are an amazing opportunity to unite fans in their community and maybe even develop our homegrown talent."

Tim Hortons and Hyundai Canada have also partnered with the Foundation as Silver Sponsors of the Nav Bhatia Superfan Fantasy Celebrity Basketball Camp.

The Nav Bhatia Superfan Fantasy Basketball Camp is being organized and executed by Push Marketing Group Inc., the company behind the Superfan since 2015.

Via in Person, Zoom or Skype

Located in Ward 5, Malton's Paul Coffey Park is a multi-use community park. The Park is 112.4 acres which allows plenty of space for many activities. The Future Directions Parks and Forestry Master Plan is responsible for putting the renovations at the park into action including the Paul Coffey Arena and the new Malton Adventure playground. The Nav Bhatia Superfan Foundation is a non-profit organization that is committed to raising money to build basketball courts and camps for youth across the globe. The Nav Bhatia Foundation was started by past Malton resident and Raptor's Superfan, Nav Bhatia.

Tangerine Bank is a leading digital bank that delivers simplified everyday banking to Canadians. With over 2 million Clients and more than $40 billion in total assets, it's one of Canada's leading digital banks. Tangerine Bank offers banking that's flexible and accessible, products and services that are innovative, fair fees and award-winning Client service. From Savings Accounts to no-fee daily Chequing, Credit Cards, GICs, RSPs, TFSAs, Mortgages, lending products and Investment Funds through its subsidiary, Tangerine Investment Funds Limited, Tangerine Bank has the everyday banking products Canadians need. Through Tangerine Project Forward™, Tangerine is committed to empowering communities through programs and initiatives that inspire self-confidence, leadership, and acceptance in Canadian youth. With over 1,200 employees in Canada, the bank's presence spans its website and Mobile Banking app to its 24/7 Contact Centres and Toronto-based head office. Tangerine Bank was launched as ING DIRECT Canada in 1997. In 2012 Tangerine was acquired by Scotiabank and operates independently as a wholly-owned subsidiary.