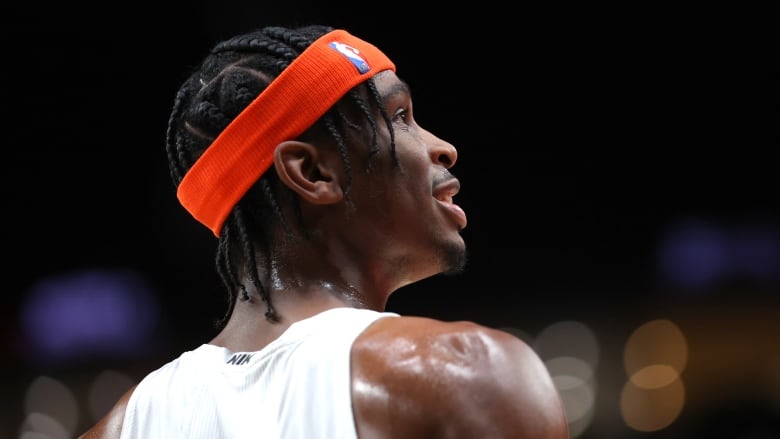 Shai Gilgeous-Alexander is one of the NBA standouts who has committed to help the Canadian men's national team qualify for the Olympics. (Abbie Parr/Getty Images)


It's been a big month for Canadian basketball. After Andrew Wiggins played a key role in the Golden State Warriors' recapturing the NBA title, Canada's Bennedict Mathurin and Shaedon Sharpe were picked sixth and seventh overall in the draft and Andrew Nembhard and Caleb Houstan went at the top of the second round. Last weekend, Canada won its first-ever medal at the 3-on-3 World Cup when the women's team captured a surprising silver in Belgium.

As we move into July, here's what to watch for in the Canadian hoops sphere over the summer:

The men's national team resumes its road to the Olympics this long weekend.

A pair of World Cup qualifiers are on tap over the next few days: vs. the Dominican Republic on Canada Day in Hamilton, and at the Virgin Islands on Monday. Canada is 8-0 through two windows of qualifying, with four more to go (after this one, they're Aug. 22-30, Nov. 7-15 and Feb. 20-28). Seven teams from the Americas region will make it to next summer's 32-team World Cup, which will serve as a direct qualifier for the 2024 Olympics in Paris.

Despite a stunning rise in the quality and quantity of Canadian NBA players in recent years (the United States is the only country with more guys currently in the league), Canada hasn't qualified a men's team for the Olympics since Steve Nash led his squad to the quarter-finals in 2000 in Sydney. The drought looked like it would end last summer when Canada had home-court advantage for a last-chance qualifying tournament in Victoria against a set of lacklustre opponents. But several of the team's NBA players bowed out, and the Wiggins-led leftovers lost in the semifinals to the Czech Republic.

In an effort to avoid a repeat of that scenario in the lead-up to Paris, coach Nick Nurse took a page from the old USA Basketball playbook and asked Canada's best players to commit to the national team for the next three summers. The carrot for those signing on is that they're guaranteed a spot on the 2024 Olympic team, while those choosing not to commit will have to take their chances. Wiggins balked, but Nurse got buy-ins from 11 other NBAers, including standouts Jamal Murray, Shai Gilgeous-Alexander, R.J. Barrett, Lu Dort and Dillon Brooks.

The core group gathered for the first time this week in Toronto for a brief training camp ahead of the World Cup qualifiers. Gilgeous-Alexander and three other NBA players — guard Nickeil Alexander-Walker and big men Dwight Powell and Kelly Olynyk — are expected to play against the Dominican and the Virgin Islands. Murray, Barrett, Dort, Oshae Brissett and Khem Birch are at camp, but won't play in this window. Cory Joseph was given an excused absence for family reasons. Brooks, though, was a no-show as the Memphis Grizzlies asked him to stay with them for treatment on an ankle injury. His spot on the Canadian team is now presumably up in the air.

The guy to watch in the qualifiers is Gilgeous-Alexander, who on Friday night in his hometown of Hamilton will suit up for Canada for the first time since he was 17. The 23-year-old Oklahoma City Thunder guard played in just 56 of 82 games this season due to injuries but still set or matched career highs in points (24.5), assists (5.9) and steals (1.3) per game. Read more about SGA here.

The women's national team has a quieter summer ahead.

Canada has already qualified for this year's women's World Cup in Australia, which starts Sept. 22. The fourth-ranked Canadians will play in a group featuring 2021 Olympic silver medallist Japan, bronze medallist France, and the host Aussies, who are ranked third in the world. The powerhouse United States, which won its seventh straight Olympic gold last summer, headlines the other group.

The Canadian team will hold a training camp in Toronto next weekend, during the WNBA all-star break. Three members of the squad are on a WNBA roster this season. Forward Bridget Carleton is averaging 4.9 points off the bench for the Minnesota Lynx, while her teammate Natalie Achonwa is averaging 6.2 but has played in only six games due to a hamstring injury. Guard Kia Nurse of the Phoenix Mercury has yet to play this season as she continues to rehab a torn ACL suffered in last year's playoffs. The WNBA regular season runs through Aug. 14, followed by the start of the playoffs three days later.

Several younger members of the national team will play for Canada in an under-23 showcase event July 5-10 in Toronto. Merissah Russell and 2021 Olympians Laeticia Amihere, Aaliyah Edwards and Shaina Pellington, all four of whom played for NCAA schools last season, are on the roster for the women's Globl Jam tournament. Canada also has a team in the men's tourney.